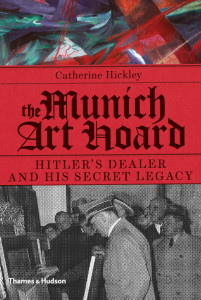 Former Bloomberg arts reporter Catherine Hickley has delved into archives and conducted dozens of interviews to uncover the story behind the headlines. Her book illuminates a dark period of German history, untangling a web of deceit and silence that has prevented the heirs of Jewish collectors from recovering art stolen from their families more than seven decades ago by the Nazis.

At the centre of that web is the art dealer who assembled the collection, Cornelius’s ambitious father Hildebrand Gurlitt. A quarter Jewish, in the pre-war years he was a courageous advocate of the modern art that Adolf Hitler condemned as ‘degenerate’. Yet Gurlitt’s anti-Nazi beliefs could not overcome the lure of the money and prestige he was to earn as Hitler’s chief art buyer in occupied Paris. He became a pawn of the regime he professed to hate, even exploiting the plight of fellow Jews to acquire pictures and profits.

Tracing the origins of the Munich hoard takes us from the street-corner battles of Kristallnacht in Breslau, Silesia, to modern-day Madison Avenue in New York; from the charred ruins of post-war Dresden to the cosy prosperity of the Swiss capital Berne in 2014. We witness the shady dealings of the Paris art world in the 1940s and listen in on political debates in modern-day Berlin, as politicians and lawyers puzzle over the inadequacies of a legal framework that to this day falls short in securing justice for the heirs of those robbed by the Nazis.

‘All Cornelius Gurlitt wanted was to live in peace and quiet with his art. But it was not to be: he and his collection captured the world’s imagination and provoked a debate about a Nazi crime that has yet to be redressed’

Catherine Hickley is among the world’s leading journalists in the field of Nazi-looted art and has published dozens of articles on the subject. In a sixteen-year career at Bloomberg News, she reported on arts and culture from Berlin for eight years, following stints as a reporter covering German politics, as Berlin bureau chief and as the editor managing European government news. She previously worked as a journalist in Switzerland and Hungary. A graduate in French and German from London University, she witnessed the fall of the Berlin Wall from the other side of the Iron Curtain as an English teacher in East Germany in 1989.

This title is also available as an eBook for Kindle, iBooks and Kobo